I've watched the DVD of Disney's The Lion King so many times that the story, the songs and the lyrics are etched into my brain. My daughter was a complete Disney baby when she was little and this was one of her favourites.  My mum went to see the musical recently and was delighted by it and I know so many other people who have seen it and loved it too that I thought that I would go.  So last week I took myself off up to London and went to see a matinee performance on my own.  The ticket was expensive but I splashed out and treated myself and I'm so glad I did. The show was indeed a spectacle - the costumes are completely fabulous, the sets are clever and the choreography is wonderful.  The actors and singers put their hearts and souls into their performances and I enjoyed everything about it.

I spent the entire interval queueing for the loo amidst about 105 schoolgirls, which was very boring, but I made up for it afterwards by going for a sparkly cocktail at the very posh One Aldwych just down the road, where I sat at the bar pretending I was very rich, watching the barmen make their amazingly complex and artistic drinks and chatting to a fabulously flamboyant Indian man and his husband.

What a great way to spend an afternoon - I felt completely topped up with colour, energy, life and London!

If you haven't seen The Lion King this might tempt you and, if you have, it will bring it all back 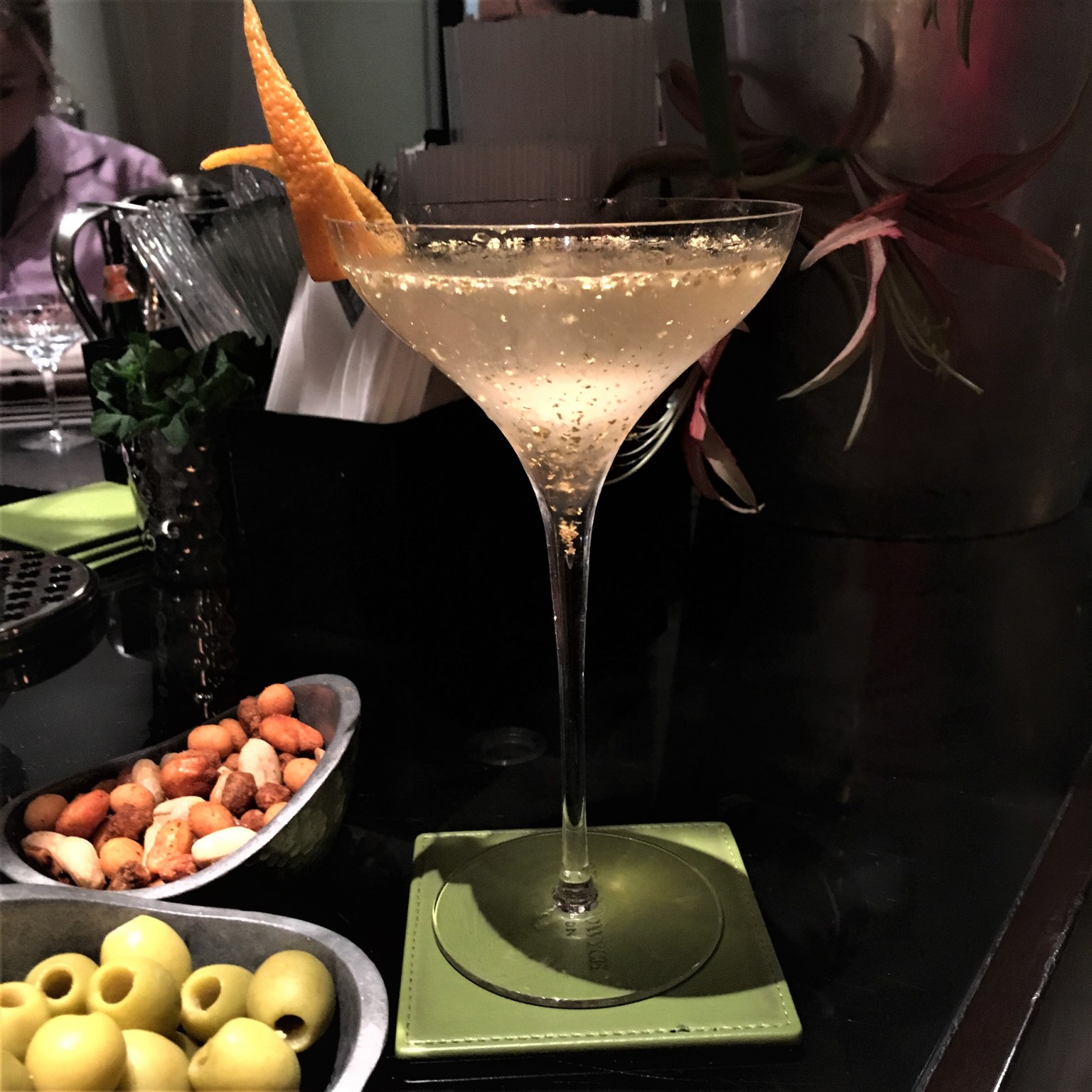 My sparkly, citrusy, fizzy cocktail - the sparkles are made of real gold leaf! (I wonder if that's actually good for me?)

The main character in The Lion King is Simba, which is Swahili for lion. The word Simha means lion in Sanskrit. Which leads me nicely to ....

A Bit About Simhasana... Lion Pose

I don't practise this yoga pose nearly enough. I don't know why, I guess there are just so many postures that some of them inevitably fall off the radar.  I'm back on it now though! It's a good one to do to release tension in the jaw, stretch the muscles of the neck and face including the eyes, clear the lungs and generally make you feel energised, empowered and a little bit fierce!

There are a few variations of Simhasana - the first two are the Iyengar way of doing it and the second is from the Sivananda tradition of yoga (see a previous post here about the different types of yoga):

Kneel on the floor and cross the ankles behind you, right on top of left, so you are sitting on your heels. Bring the weight of your body forward slightly and keep the back straight. Place the palms of the hands on the knees, pressing firmly. Stretch the arms straight and the fingers wide. Take a long slow deep breath in through the nostrils, open the mouth wide and stick your tongue out and down towards your chin and roll your eyes up towards your eyebrows. Exhale strongly and slowly with an audible 'haaaa' sound - this is your lion's roar.  Repeat with the left ankle crossed on top of the right. 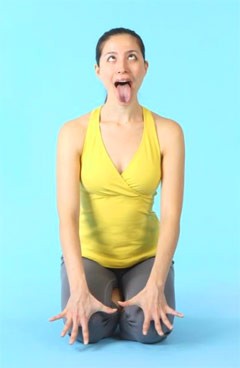 The second variation is for advanced yogis who are comfortable in Lotus Pose and strong backbends.  Sit in Padmasana (Lotus Pose), bring your hands to the floor in front of the knees, lift up onto the knees and push the pelvis towards the floor. The weight of the body is held on the hands and the knees. Breathe in through the nose on the inhale and, on the exhale, stick the tongue out and down towards the chin and roll the eyes up towards the eyebrows. Breathe out with an audible 'haaaa' sound. Release the pose slowly and repeat again changing the cross of the legs in Padmasana. 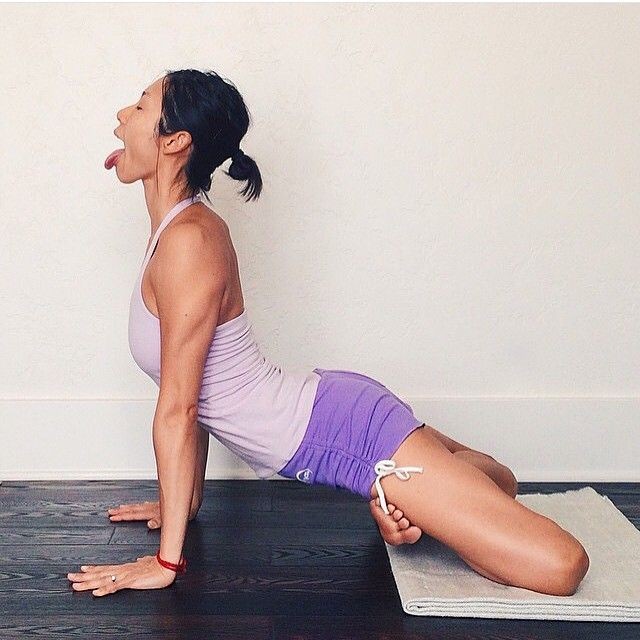 I learned the third variation from the Sivananda tradition of yoga, it's a bit more . Here you sit in Vajrasana (kneeling pose) and then open the knees wide. Place the palms of the hands on the floor with the fingers pointing towards the body. Straighten the arms and tilt the body forwards slightly, arch the back and gently lift the chin. Inhale and then breathe out with an audible 'haaaa' sound, sticking the tongue out and down towards the chin and rolling the eyes up towards the eyebrows. Release, relax and repeat up to 10 times. 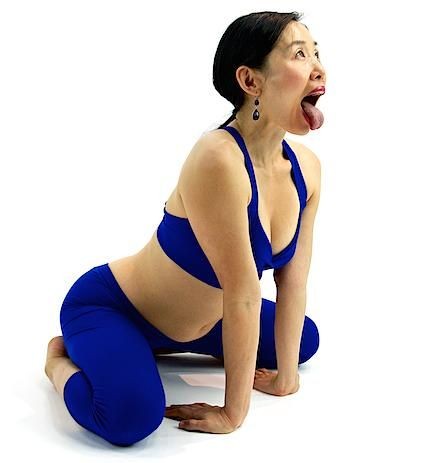 Give this pose a try - it might make you feel a little silly but all that deep breathing and roaring will leave you revved up and raring to go!

This recipe comes from the 'Weekend' paper that Waitrose give away in their stores each week. It's an easy recipe with a couple of 'cheats' and it's a substantial and tasty meal. And everyone loved it.

Note: the recipe calls for a pack of frozen mashed potato. I didn't know you could buy such a thing! I am quite capable of peeling, boiling and mashing some potatoes so I did, but if you are in a hurry you could opt for this cheat.

If you are making the mashed potato peel the spuds and put them on to boil. If you are using a packet defrost it.

Melt the butter in a large frying pan. Add the onion and cauliflower plus the coriander stalks. Season, then cover and cook over a medium heat for 10 minutes until softened and golden.

Drain the potatoes, mash them and put to one side.

Stir the lentils, curry sauce and half a jar of water into the pan of cauliflower and onion. Simmer for 10 minutes or until the cauliflower is tender and the sauce rich and thick, but not dry. Fold in half of the coriander leaves, then spoon into a medium baking dish. Heat the grill to high.

Stir in the remaining coriander and 2 tbsp of the egg into the mashed potato. Season, then spread evenly on top of the lentil base. Brush with the rest of the egg, then grill for 5-10 minutes, until golden

Serve with a selection of fresh vegetables - cabbage or spring greens is especially yummy.

This Week's Musical Offering... Moving Up by DJ Drez - a steady beat for a slow Sun Salutation.

This Week's Video... is a short promotional film for International Yoga 2015. I might have shared it with you before - I can't remember - but it's definitely worth another viewing. I hope it will inspire you to roll out your mat to practice some asanas, or take a seat somewhere quiet to do a little deep breathing or meditation...